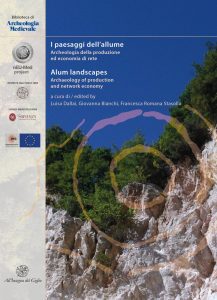 Alum is an extremely versatile and precious raw material, used since classical times in alchemy, pharmacy, leather tanning and in various fields of metallurgy. Since the Middle Ages, the best known use of alum obtained from the processing of alunite has been linked to dyeing; it is in fact an excellent mordant, and even today, artisan dyestuffs make extensive use of it.

Despite the importance that the study of this raw material has for the history of technology and more in general, for material culture, archaeology to date has dealt little with the production of alum, particularly for the medieval and modern era. In recent years, however, new archaeological research conducted by the universities of Roma-La Sapienza and Siena on two important production areas in central Italy (the Colline Metallifere district in southern Tuscany and the Tolfa mountains in upper Latium), has made it possible to acquire important data, which call for a renewed dialogue between historical disciplines.

The topic is also fully in line with the research promoted by the ERC Advanced project nEUMed: Origins of a new economic union (7th-12th centuries): resources, landscapes and political strategies in a Mediterranean region, thanks to which since 2015 the coastal valleys and inland areas of Colline Metallifere have experienced an intense season of multidisciplinary investigations. The comparison between these study contexts and the main supply areas of the Mediterranean basin (southern Italy, Turkey, Greece, Spain) allows to draw a first balance of the research, and to identify common investigation paths and methodologies to deepen production methods, trade networks, strategies of resource control between the Middle Ages and the Modern Era.